In the past decade, sex segregated institutions and forums have become rampant in Israel. Legitimized under the argument that it is part of religious or cultural accommodation to religious men who increasingly enter the military, academia, media, the public service, and the professions. Alongside modest dress requirements at the entrance to institutions such as Knesset or jail visitors, segregation discriminates women in unprecedented ways. Under segregation, women's material conditions (e.g. in academic studies) are rarely equal, but mainly – segregation itself reinforces the idea that sex difference is always relevant, thereby legitimizing entrenched sex stereotypes in all spheres of life.

Below are some op-ed columns, public talks and articles I have written or contributed to, that were translated to English.

An extensive overview of where we are at as of winter 2019, here.

Winter 2020 is bringing with it a new frontier of sex-segregation, this time in professional training for the civil service. Read the Haaretz report, with my legal analysis, here, or here:

A quick and chilling overview of the rapidly expanding and normalizing segregation of men and women can be found in this op-ed from November 2017. 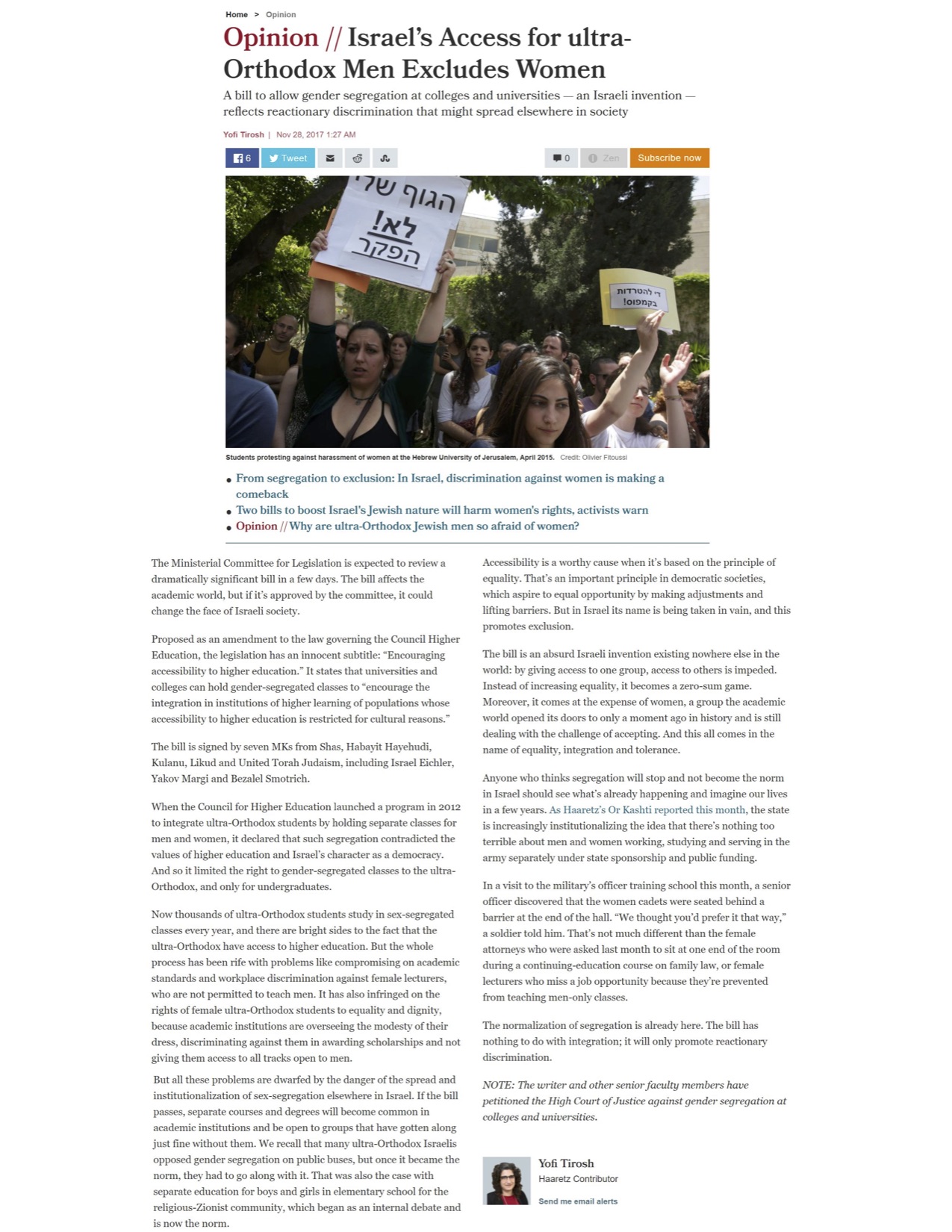 This June 2017 Haaretz essay depicts the segregation cultural in the military, which constructs female soldiers, albeit without intending to do so, as "potential modesty bombs." Here I reply to an especially troubling objection to fighting women's equality in the military, namely that it is not feminist because women should flatly refuse to serve.

My May 2017 10 minutes introduction to a public talk by prominent U.S. feminist law professor Catharine MacKinnon were dedicated to the ideological mechanisms to convince women that segregation does not hurt them, that it is a marginal issue, and that in fact, they wanted it.

In this conference comment from fall 2017, that I gave while having a bad cold at a Berlin academic workshop on religion, law, and culture, I describe the current misuse, if not abuse, of multiculturalism in Israel today.

Watch my Sept. 2018 talk at the Columbia Law Center for Gender and Sexuality (1 hour), or listen to an audio of of a conversation with progressive rabbis (73 min.).

Here is an October, 2019 report on the new and worrying development of publicly funded events exclusively for men, with my legal commentary:

Finally, a personal-political interview at the British Fathom, providing some interpretation and context to all of this.